CCNF Nazareth is our front herdsire. A mix of the 3 most influential alpaca farms in the US, Cas-Cad –Nac Farm, Magical Farms and Snowmass Alpacas. Naz displays all you could dream of in a stud… His conformational traits are flawless, and he knows for sure he´s got the stuff. He carries himself as the king he truly is. His fleece traits are top of the class, even now at the age of 7. Fineness, handle, brightness, density, uniformity, it´s all there. When we bought him, it was to have genetic diversity from the other males and females we picked. But the main thing was the x-factor, the feeling you can´t descibe in words. We first brought him to the Norwegian National Halter Show 2016. He won 1st in the white adult males class. When we walked into the championship lineup, the competition was fierce, and we really had no expectations. Winning the ”Reserve Champion White Male” was quite the eye-opener, and we looked forward to having his first cria on the ground that year. His daughter Alpacajoy Violetta Valery was the only cria from him born in 2016, as the other males had the upper hand in 2015-breedings. But what a cria to start off with, Violetta was ”Supreme Champion” in the Norwegian National Fleece Show 2017. He was used more in 2016, and we had 8 more crias from hi the following year. He did not let us down! Alpacajoy Lasarus, Alpacajoy Huckleberry Finn, Alpacajoy La Luna have won 19 broad banners between them the last couple of years,  3 which was  Supreme Championships. In 2018 the great offsprings continued to hit the ground. Alpacajoy King Solomon, Alpacajoy Afterglow of Creation and Alpacajoy LaFerrari had a splendid show season in 2019, with 13 Championships between them, 3 Supreme Championships included. The remaining bunch of crias from Naz is also very good, they just have brothers and sister a notch or two ahead. On top of that, Nazareths progeny has won the sires progeny class 2 out of 2 times (2018 and 2019) in the Norwegian National Halter Show.

Both Nazareth and his offsprings displays all the conformational and fleece. Norway has excellent animal health and strict welfare programmes, and we´re able to export to all countries following EU-regulations within 4-5 weeks from start of testing/quarantine. Please get in touch with us on PM or email for further traits you want, and we´re happy to announce that we from October 2019 will start releasing several of his best sons and daughters for sale, or females bred to him. 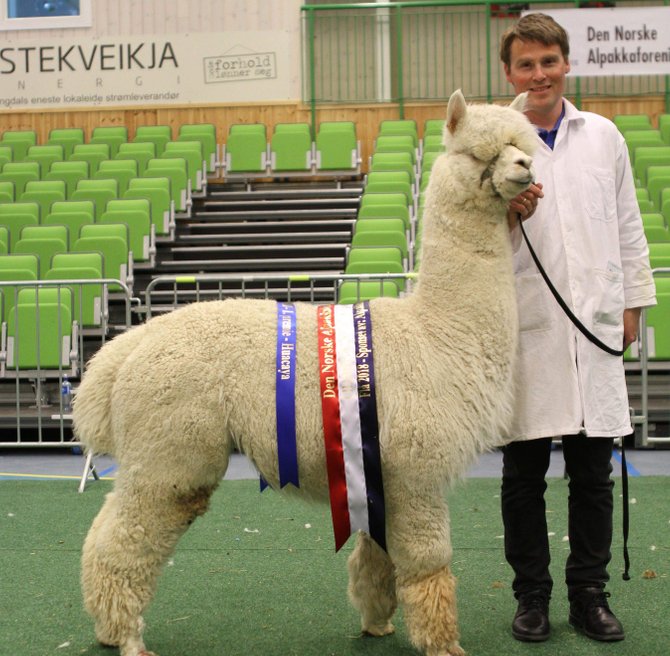 Alpacajoy Bellissimo is our next generation herdsire, being unrelated to basically our whole herd. He is also the most winning alpaca we´ve produced, having a fleece to die for… Bellissimo was the result of a carefully selected outside breeding .We had the highest bid in an auction 2014 for a breeding to Cambridge Blockbuster, and immidiately started analyzing how simular lines had worked with genetics we had in our female group. We ended up with our beloved AL Bella Betula being the winner of that selection. Bella BTW was our first alpaca brought to a show winning a 1st place (in hard competition).

When Bellissimo was born mid-august, we knew the match was made in heaven. Growing up he stood out, great traits all over, but fiber length and brightness was extreme. He continued his development all trough the winter, our only fear was that his fleece would collapse before the show… Luckily it was (more than) ok, and he took 1st place, Champion White Male, Best Male, Supreme Champion in his first show. At shearing one week later, his fleece was 150mm (8 months). To make a long story shorter, Bellissimo has thrilled us ever since, and he has been our most successful animal in the showring. He has entered 8 shows, and has won Supreme Champion in 4 of those. In the other 4, he has won a championship every time, only beaten by other Alpacajoy-animals.

Bellissimo displays all the conformational and fleece traits you want. His progeny born 2019 looks very promising, and we´lll be releasing females bred to him. Hopefully we´ll have some progeny on the sales list in 2021, the first two will definitely stay on the farm.

Norway has excellent animal health and strict welfare programmes, and we´re able to export to all countries following EU-regulations within 4-5 weeks from start of testing/quarantine. Please get in touch with us on PM or email for further traits you want, and we´re happy to announce that we from October 2019 will start 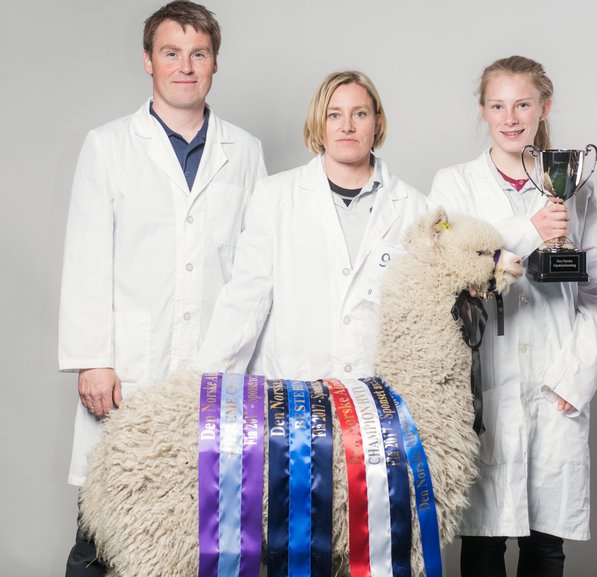